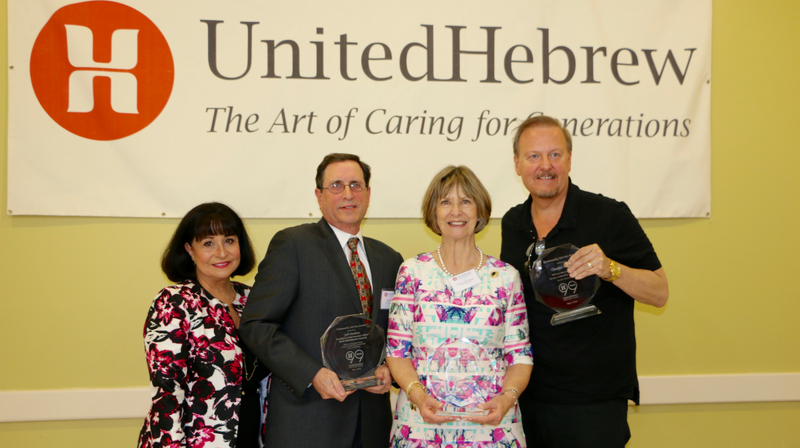 We had the honor and privilege to recognize three accomplished professionals in Westchester County for their commitment to improving the lives of others at United Hebrew’s 7th Annual Community Service Awards ceremony in May.  Jeff Menkes, Eileen Davidson, and Charles Fazzino were honored for their advocacy and commitment to developing programs, services, and artwork that enriches the lives of seniors on United Hebrew’s campus, in the Westchester community, and beyond.

In her remarks, Rita Mabli, United Hebrew’s president and CEO, thanked each honoree for their outstanding contributions, advocacy, and commitment to bettering the lives of Westchester’s elderly.

“It’s been said that it is easy to sit up and take notice—what’s extraordinary is the way these three individuals stand up and take action,” she noted. “Today we celebrate each of our honorees, who give not to receive, but because they see a need. Through their work in healthcare, education, and the arts, they each go above and beyond to enhance the lives of the elderly on our campus and across Westchester. Not only are their individual achievements remarkable, but collectively, their expertise benefits so many individuals in our community. We are truly inspired by what they do to help our seniors live independently and with dignity and good health, now and in the future.”

Jeff Menkes is president and chief executive officer at Burke Rehabilitation Hospital, a valued partner and strategic collaborator with United Hebrew, where Burke-trained therapists provide short-term rehabilitation services. Menkes joined Burke from Montefiore Medical Center in the Bronx, where he served as the System Senior Vice President–Network Development. In that role, he oversaw the strengthening and expansion of Montefiore’s partnerships with hospitals, health systems and physicians throughout the Bronx, Westchester and the Hudson Valley. Burke became a member of the Montefiore Health System in 2016, a relationship that Menkes helped forge.

At Burke, Menkes provides leadership for the inpatient hospital and outpatient division as well as Burke’s educational and community programs. He also is the primary architect for the future direction of the hospital. One of his goals is to secure Burke’s position as the preeminent post-acute care hospital in the Montefiore Health System and to encourage collaboration among member hospitals and Burke. Menkes is responsible for seeking new strategic opportunities for Burke to offer its high quality physical, occupational, and speech therapy services. Menkes also represents Burke at the local, state, and national level regarding hospital and post-acute care issues.

Menkes has held leadership roles in healthcare for over 30 years. He served as President and CEO of New York Downtown Hospital in Manhattan, and was instrumental in the merger of the hospital with New York Presbyterian. He has held high-profile positions at academic medical centers throughout the New York area and at 32, he became the youngest CEO in New York City history as the head of Elmhurst Hospital Center in Queens. He received his undergraduate degree at Lehman College and his Masters of Business Administration from Baruch College in New York City. He is a longtime resident of Larchmont.

Eileen Davidson is a dedicated educator and president at The Ursuline School, an outstanding college preparatory school whose students are frequently found volunteering at United Hebrew.  A 35-year Ursuline veteran, Davidson has served as a science teacher as well as senior co-coordinator and chair of the Science Department. She serves as a tireless advocate for expanding student opportunities, whether orchestrating and traveling on educational trips to Europe or leading an expansion of the science curriculum and school-wide science research program. She was appointed assistant principal in 1993. In 2005 she became the first lay principal of the school and in 2012, was appointed as the first lay president. As president, Eileen focuses on strategy, global education, and the fiscal health of the school. She oversees fundraising and capital campaigns to fund more Ursuline educational opportunities students of limited means.

Davidson earned her BS in Science and MS in Education and Science from Iona College. Additionally, she has completed a certification in Administration and Supervision at the College of New Rochelle. Among other recognitions, she was awarded in 2015 the NYS Senate Proclamation for her commitment to Women’s Education and her work at The Ursuline School. She also was honored by the City of New Rochelle in 2009 with a Woman of Excellence Award for Business and Professional Achievement in Education. She is a current Board of Trustees member at St. Barnabas High School and former Board of Trustees member at Fordham Prep. Davidson resides in New Rochelle with her husband, Gary.

Charles Fazzino is a world-renowned pop artist who donated extraordinary artwork to United Hebrew’s Kramer and Skalet Pavilion nursing home when it first opened nearly a decade ago; his artwork continues to inspire and trigger memories for the nursing home’s residents. Based in New Rochelle, Fazzino is known for his silk screen serigraphs in a pop-art style. His artwork incorporates influences from urban landscapes, sporting events, celebrities, and popular culture and results in detailed, vibrant, and three-dimensional work that has been exhibited in hundreds of museums and galleries in more than 20 different countries. A graduate of the School of Visual Arts in New York City, Fazzino has received private commissions from well-known figures including NFL player Tom Brady and supermodel Kate Upton, among others. He has served as the official artist for festivals and events around the world.

Fazzino is often referred to as a pop culture historian because of the details captured in his work, how it touches collectors, and the way it captures contemporary life. His legacy will mark him as part of the next generation of famous pop artists as he follows pop art pioneers such as Andy Warhol, Keith Haring, Red Grooms, and Roy Lichtenstein.