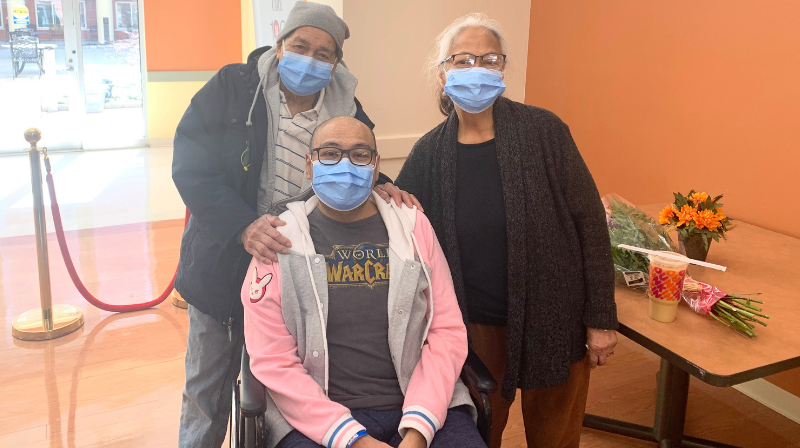 Smiles, Tears as Family Reunites After a Year Apart

It’s been over a year since Josefina and Edwin Catedrilla have been able to see their son, Cyril, 45. Diagnosed with COVID-19 in March 2020, Cyril, who was at risk of severe illness due to an underlying condition, was admitted to Mount Sinai Hospital. He had to be intubated and placed into an induced coma to protect his health.

At the very same time, the world was shutting down because of the fast-moving coronavirus. Rules were put into effect to protect people from becoming infected with COVID-19, so Cyril’s family was unable to visit him in the hospital. Then, over the summer, when Cyril awakened from his coma, he  was moved to a facility to receive specialized dialysis care. Even then, his family was unable to be with him.

“We felt paralyzed throughout the entire ordeal,” recalls Josefina. “We missed him terribly and were always concerned about his recovery.  It’s been so hard.”

Recovery, and a reunion, at United Hebrew

By October, when Cyril’s recovery progressed sufficiently,  he was moved to United Hebrew’s skilled nursing and short-term rehabilitation facility for intensive physical therapy, which he received five days per week from Burke-trained rehabilitation therapists. He also received specialized wound care and occupational and speech therapies. With the support of his interdisciplinary care team, he slowly grew stronger and healthier.

Cyril was able to see his brother, Gerard Catedrilla, a Nursing Services Manager at United Hebrew. Staff facilitated virtual visits with his parents via FaceTime, and when health regulations permitted, “window visits” with his family.

Yet, as happy as she was to see her son recovering and to visit via iPad or window, it wasn’t the same as being together in person, Josefina explained.

“What we were most looking forward to was being reunited in person,” she said.

After the arrival of the COVID-19 vaccine to United Hebrew’s campus in January, 2021, Cyril received his first and second dose of the Pfizer vaccine. His parents, both 74, became eligible to receive the shot soon after, and both were vaccinated in February. As a front-line healthcare worker, Gerard also received the vaccine.

With all four family members vaccinated and health regulations permitting in-person visits, a meeting was scheduled. On March 15, 2021, the family finally was reunited – in person – in a tearful, but joyful visit at United Hebrew.

“We had to wait for the vaccine but I am happy that they had the rules in place to protect my son,” Josefina said. “We’re a close family and this was a very happy day!”  Cyril was overjoyed as well. And the bonus? His family brought him some of his favorite things: comic books, Filipino food, and a hot cup of Dunkin Donuts coffee.