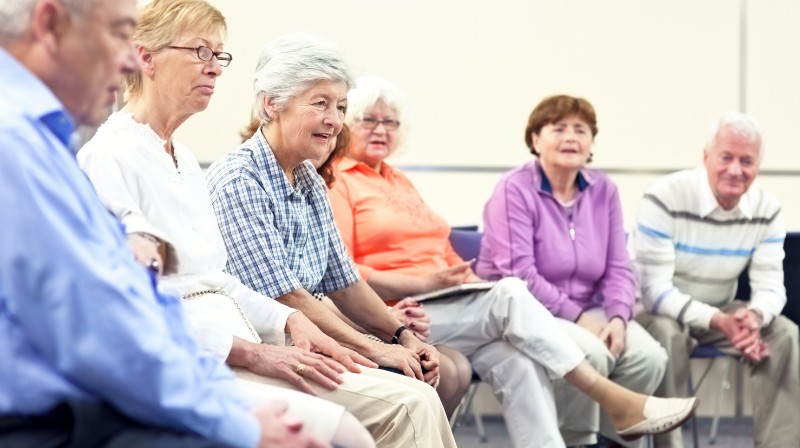 Seniors Share Views on the World in Current Events Group

Should the U.S. become involved in the Russia/Ukraine conflict? What’s the impact of commercial development in downtown New Rochelle? How will former President Trump factor in the future of the Republican party?

These are just some of the big questions tackled by the  Current Events group at United Hebrew’s Willow Towers Assisted Living community. “The point is not to agree on the issues — though we often do — but to get people talking about them,” says Gloria Selden, an active member of the discussion group. “We share our opinions, no holds barred!”

Led by Maggie Klein, the group meets twice per week for about an hour to discuss current news on global, national, and local fronts. Klein, a former journalist and retired news publisher, introduces the topics and facilitates the discussion. The group started six years ago as a way to help residents create social connections and keep them connected to each other and the world around them.

“We started during the 2016 presidential election, which was an interesting time in politics; it really brought people out,” notes Klein. “There’s always been a lot of personal interaction and differing points of view., which has made it very stimulating.”

Klein prepares for each session by reading “every inch of the New York Times,” as well as The Journal News and Westchester hyperlocal publications. She also watches an array of cable news shows and takes plenty of notes. Her goal is to summarize the news, provide a nuanced look at the issues, and facilitate a discussion that covers every angle.

“Maggie is very fair and open-minded,” Selden notes. “She helps us to learn about the issues and share our attitudes. She shares clippings I never would have seen. I don’t even buy the newspaper anymore because we get such a wonderful summary of what’s happening each week. I really look forward to this group.”

For a recent meeting, Maggie invited an official from the City of New Rochelle to discuss the city’s growth and how the downtown and the city’s various neighborhoods were changing. Discussion was wide-ranging and covered newly built skyscrapers, the impact of development on schools and crime, and the number of new residential rentals coming on the market. The group has also discussed U.S. involvement in Israel, Supreme Court nominees, and climate change.

These are heavy topics, acknowledges Klein. “So, I’ll bring in a little humor.  I once found a story about a shark on the loose ,  and hyperlocal, hometown news, like the closing of Zachy’s, a beloved wine shop in Scarsdale. It keeps everyone in touch with what’s happening in their communities.”

“It’s really engaging,” says Selden, who retired from a career begun in merchandising and ending at Burke Rehabilitation Hospital. “I never miss a meeting. We get a big crowd from all walks of life — retired teachers, doctors, social workers, all kinds of professionals – people who were active in life and enjoy being active now. We’ve all gotten to know each other and we go to lunch together right before the group. It’s wonderful.”

Says Klein, “It’s stimulating for me, too. Leading this group keeps me 82 years young.”