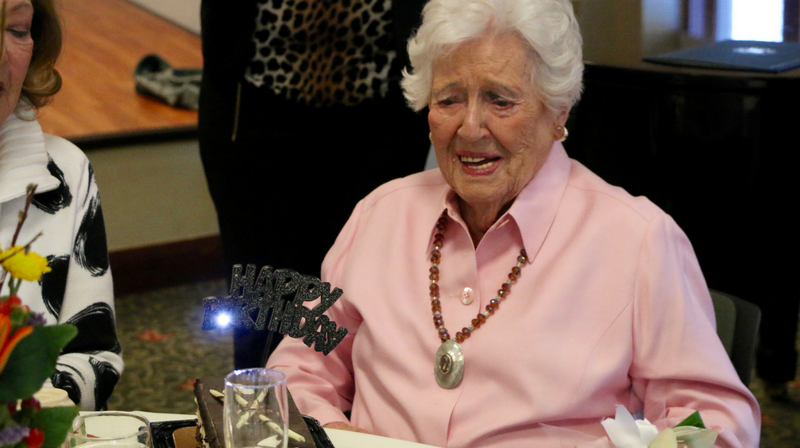 Secrets to a Long Life, from Our Awesome Centenarians

There may be more than one pathway to reach age 100, but three women who have passed that milestone have a few key things in common: they remain close to their families; they cultivate passions, hobbies, and interests; they have a strong social network; and they maintain their independence as much as possible.

“My mother has always had a positive outlook and a can-do attitude,” explained Judy Friedlander, daughter of Shirley Meyers, 102, one of three centenarians who recently celebrated joint birthdays at a luncheon at United Hebrew of New Rochelle’s Willow Towers Assisted Living facility. “She’s as active as she can be, every day, and that keeps her mentally and socially connected.”

Meyers joined Anne Adler, who turns 103 on March 28, and Mary Tallarini, who turned 102 on February 14, at a special ‘Century Celebration’ hosted by Willow Towers. Surrounded by family and friends, the three women were feted by Nora O’Brien, Executive Director, Willow Towers; Rita Mabli, President & CEO of United Hebrew; and the Hon. Noam Bramson, Mayor of the City of New Rochelle, who presented each honoree with a special proclamation.

“I am delighted to join in recognizing three remarkable centenarians whose life experiences and personal examples inspire neighbors and friends throughout New Rochelle,” Bramson said.

Keys to a Long Life

Centenarian studies show that more people are living to age 100 and beyond; contributing factors to their long life include having an optimistic attitude, practicing good health habits, and having plenty of social connections. Across United Hebrew’s campus of comprehensive care, compassionate and expert staff foster friendships, healthy lifestyles, and new social, cultural, and recreational interests among their residents, noted Mabli.

In her remarks, O’Brien applauded the accomplishments of the three women—graduating from college at age 70; running a family business while caring for aging parents and young children; and traveling the world to fulfill a life dream, among others. “Today, we celebrate three lives well lived. We honor their past, present, and future contributions to community; and we revel in the wisdom of three women who live their lives to the fullest.”