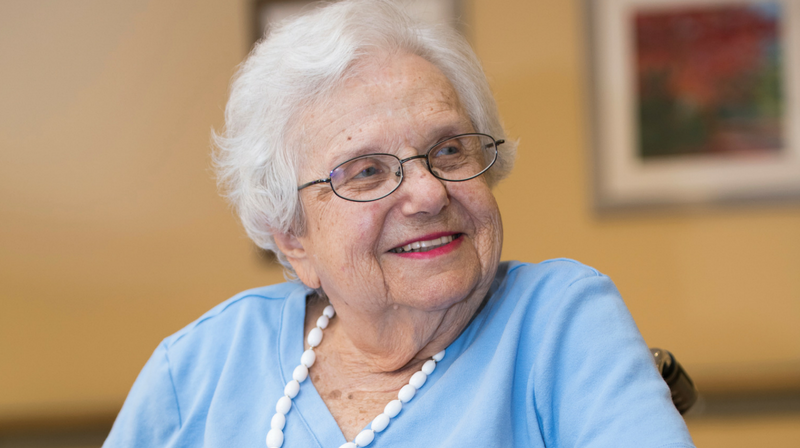 The Secret to a Long Life? Fun and Friends, Says United Hebrew Resident

When Gimbel’s Department Store opened in the Cross County Shopping Plaza in 1954, Adeline Gassman was one of the first women in the store’s sales force. She earned all of $1.45 per her hour, plus commission, selling home furnishings to a wide range of clientele, Many became repeat customers over the years. While many of her peers were homemakers, 32-year-old “Addie” thrived as a working woman.

“It suited me,” says the 96-year old United Hebrew resident. “I liked talking to people. and I’ve always liked interacting with people because I find them interesting.”

Addie worked at Gimbels until the storied retailer closed its doors in 1986. Over the course of her 30+ year full-time career, she also raised her daughter Jan; bowled in a league with her husband, Maurice; led her daughter’s Girl Scout troop; sang and danced in “Fiddler on the Roof” and other theatrical productions, staged by her synagogue; played Mah Jongg in a weekly group; and hosted most of her family’s special celebrations and holiday gatherings. After she retired, she and Maurice continued many of their social activities and traveled extensively.

Overwhelming? Nope, not according to Addie.

“Staying busy, having fun—that’s the secret to a long life,” she says. “As long as I’m busy, I’m happy.”

She should know. Now a resident of United Hebrew of New Rochelle’s nursing home for the past five years, Addie continues to have busy days. She enjoys the facility’s arts and crafts and dance movement classes. She also attends the nursing home’s music therapy sessions and especially enjoys songs from the Big Band era. And she relishes visits from her daughter and granddaughters, Jaime and Sara. She also participates in United Hebrew’s field trips, such as a recent jaunt to Empire City Casino, where she played the slot machines.

“I’m not much of a gambler, but I like the action!” she says.

Born in 1922 in Manhattan, Addie has always had a strong network of family and friends. She grew up with her parents and older sister, Bea, and a handful of Aunts and Uncles looking after her. She and Maurice, to whom she was married for 70 years, developed a wide circle of friends through their neighborhood and community activities, some of whom she still speaks with today.

“Friends stick with you; family, you can rely on. That’s what’s important in life,” reflects Addie. “I feel very fortunate.”