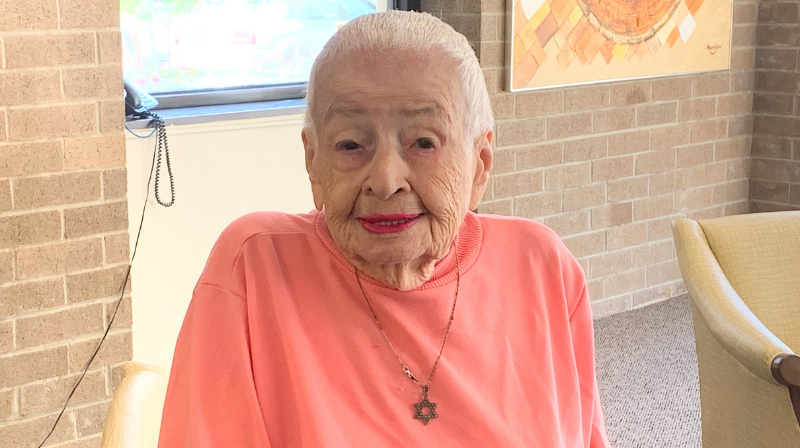 Sylvia Sabat, née Epstein, came of age during the Roaring 20s. She lived with her parents and two sisters on Houston Street, in the Lower East Side of Manhattan, then a teeming, bustling magnet for immigrants. She and her sisters loved being out and about. They frequented her family-owned grocery store, located on St. Marks Place. And they loved the nightlife.

Back then, she and her sisters often went out dancing. “She loved to have a good time,” according to Steven Sabat, Sylvia’s son. “And she always took the time to look her very best.”

On June 9, Sylvia Sabat celebrated her 105th birthday with her children, grandchildren and great-children at United Hebrew of New Rochelle’s senior housing apartments, where she has been a resident for the last 22 years. She’s traded nights out dancing for small family gatherings, but she is still careful about her appearance. “Never leave home without lipstick” is her personal motto.

As Houston Street widened for the construction of the New York City’s IRT Subway Line, Sabat’s circle grew wider, too. After her family moved uptown to the Bronx, she met Julius Sabat, aka “Joey the Greek.” They married and moved into an apartment of their own on Simpson Street. The couple had three boys: Joel, in 1942, and Richard, in 1946. Steven arrived in 1957, and the family moved to Pelham Parkway. His father supported the family through his work as a cab driver and letter carrier. When Steven Sabat was just six years old, however, his father passed away.

“We went from my father supporting us to my mother raising three boys all alone,” recalls Sabat. “We struggled, but we made it. She was a very loving mother and she did her best.”

With her husband’s pension and the support of an extended family, Sylvia Sabat parented the boys. She was there for them through their Bar Mitzvahs, high school graduations, college, and military service. Evens her sons grew and forged their own paths, Sabat was able to remain in their Pelham home.

An independent lifestyle, with help if needed

When she was 83, Sabat moved into Soundview Apartments, located on United Hebrew’s campus, where she enjoys the company of longtime friends and neighbors. She’s an uplifting presence, says Joanne Russo-Lanza, vice president of senior housing.

“Sylvia is and always has been an inspiration — a model for who I want to be when I grow up,” explains Russo-Lanza. “She never has a complaining word, she is always pleasant. She is surrounded by the love of her adoring family, and that certainly has helped her keep going for as long as she has. She’s a beautiful lady.”

What has also helped is the support of United Hebrew’s staff, notes Steven Sabat.

“Joanne and Tara (Pye) are always there when we need them. They have helped my mom fill out required paperwork so she can access the services she needs, like Meals on Wheels, Medicaid, and re-certification for housing. They have been a great help to us.”

Sylvia Sabat also receives support from United Hebrew’s home care division, with health aides visiting her each week. She enjoys seeing her friends in the building. Her next-door neighbor surprised her with cookies on her birthday.

The Sabats remain close as a family, even though Joel lives in Florida, and Richard and Steven live in New Rochelle. Steven Sabat says he feels fortunate he can still visit his mother each week. “I’ve been wondering how much time we have left together for a long time! It amazes me that she is 105. She’s still so sharp.”