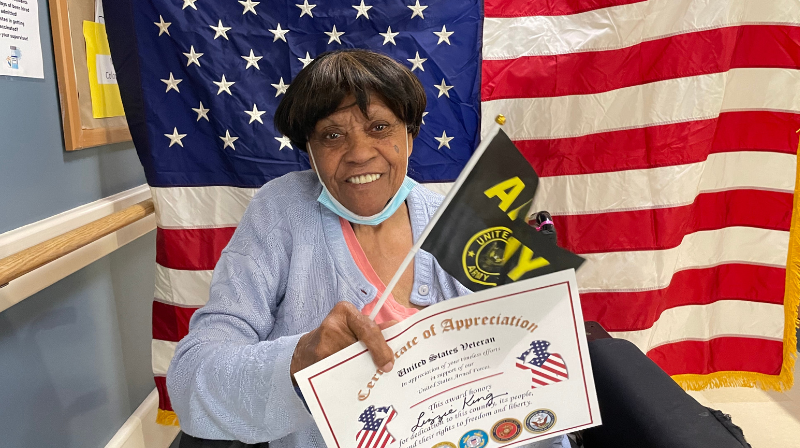 Meet Lizzie: This Small-Town Southern Gal is No Shrinking Violet

Lizzie King is a long-time resident of United Hebrew of New Rochelle whose story began in a small-town in Tennessee. After moving to the big city of Nashville with her family, she graduated from high school, met her first husband, and had her first son, Elmo. After graduation, she started night school while raising her son. Her life was uprooted when a close friend who lived in New York had a baby and needed Lizzie’s help. Her marriage was falling apart, according to Lizzie, and the time seemed right to make a move.

“I answered the call and moved north,” recalled Lizzie, a young mom herself. She moved to New Rochelle to help her friend raise her child and found additional work as a live-in homecare nurse for a local physician’s mother on Daisy Farms Drive, off of Wilmot Road. She worked and volunteered as a caregiver while completing her nursing education. At the same time, she completed Army training she had started while living in Tennessee. It was a busy time for this young single mother.

Says Lizzie of this period of her life, “I was happy to be independent, on my own, and making money.”

After the woman she was caring for passed away, Lizzie went on to work in healthcare facilities in New Rochelle. She remarried and had a second son, Freddie. She also transitioned from one helping profession to another—she started working for the New Rochelle Police Department as a traffic cop for the city, while also taking on crossing guard responsibilities in New Rochelle City Schools, a role she enjoyed far more.

“At one point, I was directing traffic on North Avenue near the post office and I was in the middle of six lanes of cars. It was stressful,” says Lizzie. “But when I was at Roosevelt Elementary School, I just loved it. I loved helping the little ones. Sometimes I watched them on the playground after school too. Their mothers trusted me. It was really nice.”

Lizzie loved working with the children at the school and helping them cross the street, getting to know them and hearing about their days. It was a job she enjoyed for many years. She would have stayed in the role much longer, had she not had a stroke in the early 2000s. After healing at home, Lizzie’s health needs grew and she moved to United Hebrew’s skilled nursing facility in 2005, so she could receive the support she needed.

Despite her health challenges, Lizzie lives as independently as she can. She enjoys the participating in the full complement of activities at United Hebrew’s including playing Bingo, attending music programs, and working in the garden. Her favorite flower is the violet; she tends to a pot full of them in her room. She also enjoys relaxing and watching TV and movies, (“Gone with the Wind” is her favorite) and serves as an active member of United Hebrew’s  Resident Council. As a liaison between the residents and the facility administration, Lizzie advocates for resident needs and provides input on monthly events.

Lizzie’s exuberant presence is welcome everywhere she goes, according to Carrie Deppong, recreation director at United Hebrew. “She’s always upbeat. She’s beloved by staff and her fellow residents. She advocates for others and ensures they are heard.”

For her part, Lizzie says she wouldn’t want to be anywhere else.

“All I know is, as time goes on, I may not get to continue doing what I love, so I might as well do it now,” she says about her daily life at United Hebrew. “It feels like home here. I get to see and talk to my friends every day; I get to be in the sunshine. I am very happy.”

PrevPreviousHow Much Care Does Your Loved One Need? Planning Ahead is Key. 
NextWillow Gardens Memory Care Expands With New WingNext