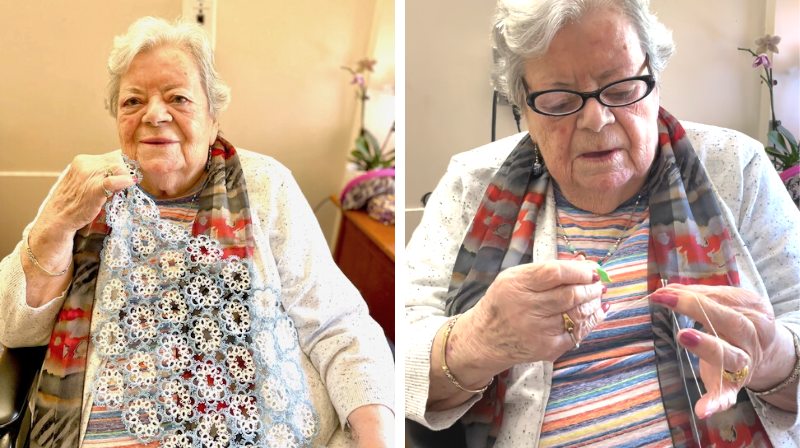 An intricately woven series of rainbow-colored knots and loops designed and knitted by a United Hebrew of New Rochelle resident has earned a spot in a statewide competitive art exhibition.

Bianca Padula’s artwork, titled “Chiaccierino,” was selected as a winner from over 200 artworks submitted by residents, staff, and volunteers affiliated with LeadingAge New York, a statewide trade organization which represents nonprofit senior care providers. The top 70 pieces were displayed at the organization’s annual conference and will be part of a traveling art show put on by the association.

Chiaccierino — or tatting, as it is known in the U.S. — derives from the Italian word chiacchiere, or “to chat.” So, chiaccherino means “chatty,” according to Bianca, who learned the art form when she was just a young girl in Italy. Says Bianca, “when women work at it together, they can chat with each other.”

Born in the province of Avellino, in the Campania region of Southern Italy, Bianca moved with her family to Tripoli when she was six years old. Under Mussolini’s rule during the second world war, many Italian children were sent to “colonia,” or camps, where they were protected from harms way, studied with nuns, and learned new skills. It was a difficult period for her, living without her family, but out of that time was born her knowledge, talent and love for the art of chiacchierino. In 1968, Bianca left Italy with her husband and children. They settled near Arthur Avenue in the Bronx, where Bianca continued to practice her art.

“I enjoy the process of creating,” explains Bianca. “A few years ago, I was very ill. But I looked at my thread and said to myself, ‘I need to finish that piece.’ It keeps my mind going.”

Bianca’s artwork is one of several winning pieces created by United Hebrew residents and selected for art exhibitions over the years, according to Rita Mabli, president and CEO.

“An important part of daily life on our campus, arts activities help our residents to create connections with each other and to their communities. We’re happy to support them and facilitate participation in art shows, which provides a forum for their talent to shine.”

With durable cotton thread and a plastic tool called a shuttle, Bianca creates a variety of pieces with the tatting technique. She’s made pieces for framing, as well as lace collars, table runners, coasters, and bracelets for herself, friends, and family members, including her son, and two daughters and granddaughters.

The art form requires a great deal of patience and “good eyes,” says Bianca. “Sometimes I need to take a rest when my hands hurt. But as soon as I finish one piece, I always start another one. I feel happy when I’m creating new pieces.”

PrevPreviousDo’s and Don’ts for Speaking With People With Dementia
NextCaregiver Support for Millennials: What You Need to Know About Caring for Aging Parents Next