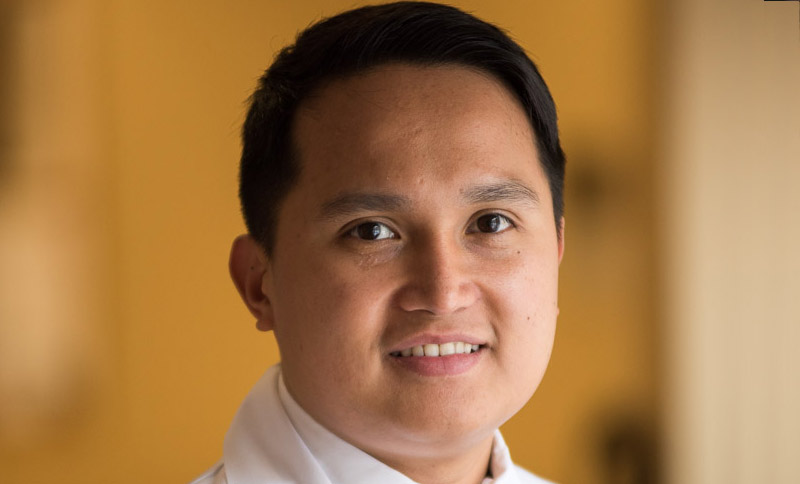 There’s a fresh face at United Hebrew making sure that the nursing care we provide is top notch. But don’t be fooled by his youthful appearance. Jerome Bagaporo, who was recently named Chief Nursing Officer at our skilled nursing facility, may look younger than his 35 years, but he is a seasoned nurse with a decade of experience. Over that time, he has developed a commitment to seeing that the new wonders of healthcare technology emerging almost daily are always used to the patients’ benefit as part of a holistic approach to care.

“With the transition to electronic health records, nurses have a better view of what is going on with a resident with just one click,” Bagaporo says. “But we’re not removing the tender loving care that we give the residents, nor the interpersonal relationship. That personal relationship with a resident cannot be replaced by technology, a philosophy we maintain here at United Hebrew.”

A native of the Philippines who lives in Yonkers, Bagaporo is not new to our campus of comprehensive care. For two years, he led the effort to put patients’ records into electronic form. Before coming here, he served as a nurse at the Isabella Geriatric Center in Manhattan after arriving in the United States in 2007. In the Philippines, he served as a professor at a college of nursing.

He took over the top nursing position from Patricia McCormack, a native of Ireland who retired after more than half a century at United Hebrew. (McCormack, who recommended her successor for the job, hasn’t left completely. She returns twice a week from her home in Norwalk, Connecticut to volunteer at United Hebrew.)

Talk with McCormack and Bagaporo and you’ll have a front-row view of how nursing has changed. When McCormack came to United Hebrew in 1964, almost all the residents she cared for were survivors of the Holocaust. Born and raised in Ireland, she had met some survivors when she studied nursing in England, but they had not opened up to her the way survivors in the United States did.

In the decades since, regulations governing nursing care have become much more extensive and technology aids nursing in countless new ways. United Hebrew owns a machine, for instance, that can search for a vein to aid when drawing blood.

Bagaporo joined United Hebrew as the minimum data set and technology coordinator, with the job of completing the electronic recording of all residents’ data. Working side-by-side with McCormack, he said, he saw a facility that understood the importance of a holistic approach to personal care. That approach permeates United Hebrew’s 7.5-acre campus where we offer a full range of services, from independent living to long-term skilled nursing.

“The number one thing that I want to continue here is that good relationship with the residents, the families and the community,” Bagaporo said. He said he learned much from the way McCormack rarely spent time in her office because she was always making herself available to the nurses and others.

United Hebrew President and CEO Rita Mabli said the time Bagaporo and McCormack worked together helped make a smooth transition from one exceptional administrator to another.

“Jerome is more than just a whiz at the technology used in nursing and keeping records,” she said. “He understands how all the advancements enhance care of our residents but don’t take the place of face-to-face contact. That makes him a perfect fit for United Hebrew.”