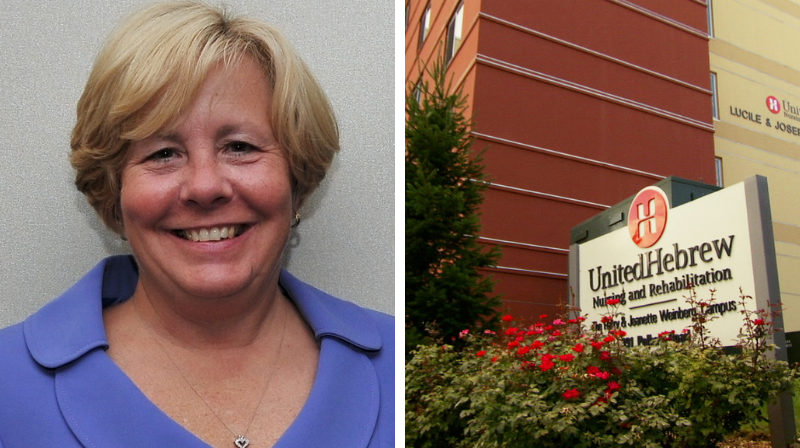 We are so pleased to announce that Rosemary McLaughlin, a senior vice president with Signature Bank, has been named as the chair of our board of directors. She is the first woman chair to hold the position in our 100+ year history.

In her new role, Rosemary will help to ensure our organization’s vitality in the senior care industry and maintain our nonprofit mission to provide quality care to seniors in need.

“I’m humbled to be the first woman chair of the board,” she said. “I’m also privileged to serve in this role at United Hebrew, where the staff is so invested in the residents’ health and well-being. The delivery of care is simply excellent here; it is head and shoulders above United Hebrew’s peer institutions.”

In her announcement, Rita Mabli, president & CEO, said, “Over the past several years, Rosemary has been an active board member, providing us with invaluable advice. With her guidance I know United Hebrew’s future is bright.”

Rosemary succeeds James Staudt, attorney and partner in the firm McCullough, Goldberger & Staudt, who will remain on United Hebrew’s board as a senior chair. Rita also thanked Staudt for his steadfast support and leadership.

“We met the growing demand for senior care services extraordinarily well in the past few years, in no small part because of the leadership of Jim Staudt and our board of directors,” she said. “We are so grateful for the expertise and passion he brought to his role.”

Rosemary says her relationship with United Hebrew is deeply personal. A 43+ year resident of New Rochelle, she grew up down the street from the original nursing home. “United Hebrew was always a good neighbor, a community institution. My mother lived in United Hebrew’s assisted living facility and nursing home and we couldn’t have been happier with her care. When Rita asked me to join the board in 2014, I didn’t hesitate to get involved.”

Since then, Rosemary has provided United Hebrew with critical counsel and thoughtful advice on several initiatives, including the 2016 opening of Willow Gardens Memory Care, Westchester’s first assisted living residence dedicated to those with Alzheimer’s and dementia. She also served as the board liaison on the nursing home’s quality assurance and improvement committee.

“Staff efforts around quality are consistently amazing,” she says. “They’ve earned five stars and have quality scores far better than the national averages. And it shows—the residents are always smiling and happy. So, my goal as board chair is to lend my expertise to keep the organization on firm footing and to help uphold their incredibly high standard of care.”

While up to the challenge, Rosemary says she has big shoes to fill. “Jim Staudt has been a rock, particularly through these challenging times. I am fortunate to have worked with him and with Rita, who has incredible vision and is an extraordinary leader in her own right.”

For his part, Jim says serving as board chair was “among the most rewarding experiences of my life.” Among the most meaningful moments of his tenure occurred when he had the chance to personally thank staff and acknowledge the importance of their work.

“One morning during Covid, I arrived very early to clap for the staff, which had become a tradition after the onset of the pandemic,” he recalled. “I saw Rita greeting individuals at 5 a.m. as they arrived by bus and train, and thanking them for putting their own health at risk to come to work. I heard staff reply, ‘My residents need me,’ or ‘I want to be here.’ For these individuals, work is not just a job. It is a vocation. They care with such energy and love. That was an inspiration to me.”