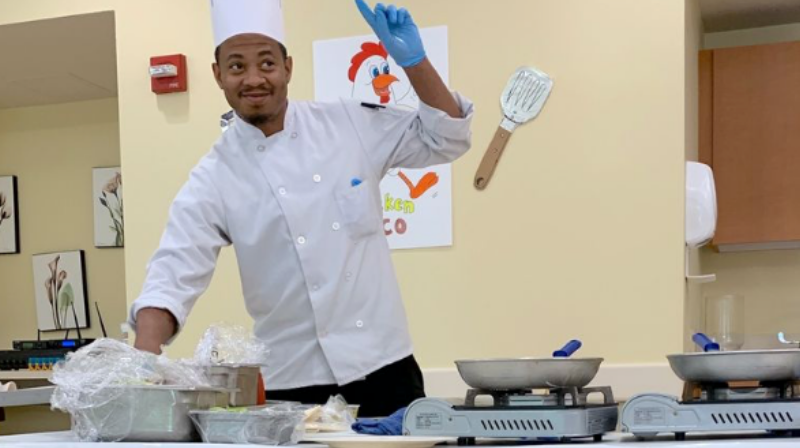 Chef Reflects on 16-Year Career at United Hebrew: ‘Going to Work is Like Coming Home’

Jahmal Guinyard was only 19 when he was hired to be a dishwasher at Willow Towers Assisted Living. Now he’s the Executive Chef at Willow Gardens Memory Care Assisted Living. He hadn’t planned on a career as a chef, but he took advantage of some unexpected opportunities.

In the early years, while he washed dishes, he said he took note of what was happening in the kitchen.

“I was always intrigued by what Chef Anna was doing,” he says. He often lingered after his shift to observe her at work and ask questions about how she cooked and why she chose one ingredient over another.

Chef Anna noticed his interest and soon promoted Jahmal to Prep Cook, where he assisted her with chopping vegetables, measuring ingredients, and preparing simple dishes such as salads.

“I saw how she put things together, how she incorporated local and seasonal ingredients. I saw her add her own spin to dishes, and learned that no two people cook the same way.”

Over the next 12 years at Willow Towers, he served under four different executive chefs, each trained at the Culinary Institute of America. He was impressed by the level of quality each brought to the senior care community.

“The meals residents have here are the same quality anyone would have in a fine restaurant. The people who live here enjoy a nice quality of life. I loved being a part of delivering that to them.”

He hadn’t planned on a career in cooking, but he was drawn to the creative aspect, he says. “With cooking, you take a recipe, put together different tastes and textures and add something new to make it your own. You put your name on it and it’s yours.”

He was also inspired to cook by his grandmother. “She was the love of my life. I love the residents here, and when I cook for them, I feel like I’m cooking for my own family.”

While Jahmal expanded his cooking skills, he progressed to positions of increasing responsibility: from Prep Cook, to Line Cook, then First Cook. He learned a variety of preparation methods including grilling, frying, sautéing, and roasting. He learned to bake from Chef David Shakin, Willow Towers current Executive Chef. Then he took on omelet making and managed the entire breakfast service.

In 2015, Jahmal was named Sous Chef at Willow Towers. He oversaw ordering all product and took over the baking operation. He relished the additional responsibilities, while looking to the future.

As Jahmal’s cooking career began to flourish, his family life did as well. He married in 2010, and had three children, two girls and one boy. Motivated to provide for their futures, he decided to return to school to work toward becoming an Executive Chef. He enrolled in Naugatuck Community College in 2015.

For two years, the young father worked full-time at Willow Towers while maintaining a full schedule of classes. The support of his supervisors and co-workers helped him through that incredibly busy time, he says.

“Sometimes, I wondered if I would ever finish. It was a lot to manage. But my co-workers supported me. Nora O’Brien (Executive Director, Willow Towers Assisted Living and Willow Gardens Memory Care) encouraged me to keep going. That meant a lot. The people I work with, they feel like my own family. And of course, my kids inspired me. Thinking about their future got me out of bed every day and helped me to push through.”

Two years later, Jahmal earned his associate’s degree in Hospitality and Service Management and a Certificate in Dietary Supervision. At the same time, United Hebrew was preparing to staff its new Willow Gardens Memory Care community with an executive chef. He asked Nora to consider him for the opportunity.

Ready to ‘Make My Own Lane’

Now 35, Jahmal is the Executive Chef at Willow Gardens Memory Care. He oversees a staff of six, including a dishwasher, cooks and dietary aides. His team prepares 21 meals and snacks for 50 residents each week. His menus reflect cuisines from around the world, with dishes inspired by Italian, Spanish and Asian influences.

“I was ready for this role,” he says. “I had been waiting so long and felt like it was my time to shine. I wanted to make my own lane and not copy the ones before me. And I wanted to live up to everyone’s expectations.”

Recently, he worked with Rita Mabli, United Hebrew’s President & CEO, to create an event that would engage

residents in the sensory experiences of cooking, while shining a light on the talents of the organization’s three executive chefs: Chef David, Chef Jahmal, and Chef Udo, who oversees food service at United Hebrew’s skilled nursing facility.

United Hebrew held its first “Chef Cook Off” event in April 2019, at the time many residents were preparing to celebrate the Passover holiday. Each chef prepared his own recipe of potato latkes. Residents watched, smelled, and tasted along the way.  Judged in a blind tasting, Chef Jahmal’s latke recipe took the top prize.

“To win that competition was validating. I actually used Chef David’s recipe as a base, but added my own unique spices and take on it. Because I trained under him it was really special, I felt like I was seen as an equal.”

But the real reward is cooking for the residents at Willow Gardens, he says. He enjoys receiving special requests from Willow Gardens families to cook a loved one’s favorite recipe and happily complies. He enjoys making food that is healthy and appealing and makes people feel good.

He recently moved with his family to Danbury, CT. Even with a longer commute, he never considered leaving Willow Gardens. “This place and these people have embraced me. I feel at home and I feel valued. I never felt anything but love and support. That’s why I’ve stayed all these years. I leave home to go to work every day. But when I get here, I feel like I’m home.”