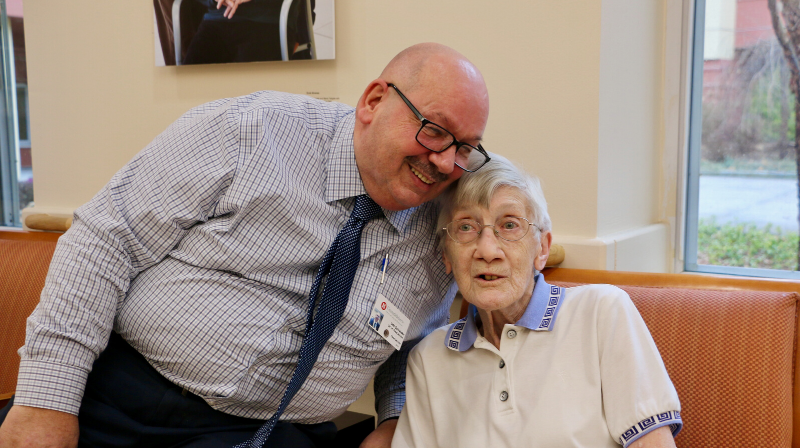 Our Chef Made Sauerbraten for This Resident, and Her Reaction Was Amazing

There are several variations on the traditional German pot roast dish known as sauerbraten, but our chef apparently hit on just the right version when he prepared it for Doris Holtmann, a resident of our nursing home and native of Sogel, Germany.

Udo Schneider, chef and director of food and nutrition services at United Hebrew, cooked his family’s sauerbraten recipe for her. It has a bold blend of ingredients, starting with bottom round cut of beef that is marinated for four days in a soup of oil, red wine vinegar, red wine, and pickling spices. After marinating the meat, he browns the meat and makes the gravy. To balance the acidity and sourness, he adds brown sugar and ginger snap cookies.

Holtmann sampled the Schneider family favorite and her face lit up. “Sauerbraten was the last meal my mother made for me before I left Germany,” she remembered. “We only had it as an occasional treat, so, I was excited to have this sauerbraten. I am happy to have Udo cooking for me.”

Schneider noted: “I make an effort to get to know as many residents as possible. It just so happened that Doris and I hit it off, and the fact that we both grew up in Germany was a happy coincidence.”

Seventy years ago, Holtmann left her home country with her brother when she was a school girl. She finished high school in New Rochelle, then worked for various doctors in the area. She has been a resident of United Hebrew of New Rochelle’s campus for the past seven years, where she enjoys attending Catholic mass and spending time chatting with other residents and staff, including Schneider.

Schneider, a native of Worms, Germany, grew up about 300 miles south of Holtmann’s hometown of Sogel. After graduating from the Karl Marx Institute of Culinary Arts, Schneider moved to the United States in 1983 with his wife, Heidi. He started work as a chef at the Bavarian Inn in Lake Ronkonkoma, Long Island, eventually transitioning to healthcare dining services.

“There’s something about food that just makes people happy,” he said. “I’ve been working in nursing homes for over 20 years, and I can say that United Hebrew is a fantastic place. Everyone here goes out of their way to make our residents happy.”