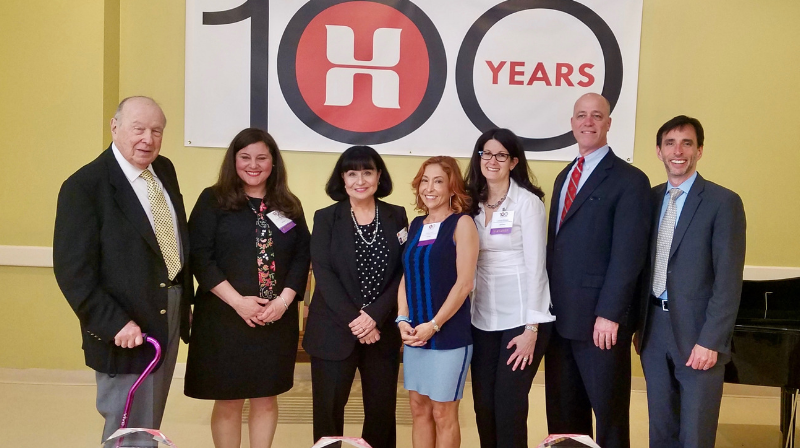 We were honored to recognize four individuals dedicated to improving the lives of those they touch with their spirited leadership at our Eighth Annual Community Service Awards ceremony held May 7:

Michael Fosina, President, New York-Presbyterian Lawrence Hospital; Jennifer Lanser, Executive Director of the New Rochelle Chamber of Commerce; and Jackie Saril and Lauren Pekats, co-presidents of the Sisterhood of Temple Israel of New Rochelle, were recognized for their advocacy and commitment to developing services and programs that enrich the lives of seniors on United Hebrew’s campus,  and others in the Westchester community and beyond.

“Today we celebrate each of our honorees, who give not to receive, but because they see a need,” said Rita Mabli, President and CEO of United Hebrew. “Through their work in healthcare, business, and faith-based communities, they each go above and beyond to demonstrate the meaning of the word service. They’ve enriched many, many lives.”

The individuals and their organizations were celebrated at a special ceremony attended by approximately 100 business, government, and healthcare leaders, at United Hebrew’s campus in New Rochelle.

Michael Fosina, MPH, FACHE, is a valued partner of United Hebrew and fourth generation New Rochellean. Jennifer Lanser is an extraordinarily committed community leader and a key collaborator with United Hebrew. Jackie Saril and Lauren Pekats, and their Sisterhood enhance the lives of United Hebrew residents through enriching programs and activities.

“Our Community Service Award recognizes a commitment of time and desire to improve the quality of life for others; these recipients hit that benchmark many times over,” Mabli noted. “Not only are their individual achievements remarkable, but collectively, their expertise benefits many individuals in our community. We are truly inspired by all that they do to help our communities thrive.”

Fosina is active on several boards of professional and community organizations, nursing homes and senior centers. He is the Chair-elect of the Board of Governors of the American College of Healthcare Executives (ACHE), and is board certified in healthcare management as an ACHE Fellow. He is also an advisory board member for the University of Delaware, College of Health Sciences; a member of the board of trustees for Silvercrest Center for Nursing and Rehabilitation; a board member for the Council of Senior Centers (LiveOn NY); Westchester County Association; and the Business Council of Westchester. He also remains active as a Fellow in the New York Academy of Medicine and is a former Health and Aging Policy Fellow and a Congressional Fellow.

Fosina, a fourth-generation New Rochellean, earned his bachelor’s degree from the University of Delaware and master’s degree in public health from Columbia University School of Public Health.

In the role of Executive Director of the New Rochelle Chamber of Commerce, Jennifer Lanser acts as an advocate and a public relations specialist for businesses within the New Rochelle community. In addition to marketing and promoting business in the city, she also leads the planning committee for many of the popular community events in New Rochelle, including the Annual Thanksgiving Parade, the Holiday Lighting and Women of Excellence award dinner, along with volunteers and several of the Executive Board and Board Members.

Lanser began her career at Bellevue Hospital in New York City, serving in an array of roles, including helping to manage Bellevue’s 150-physician outpatient clinic and its interdisciplinary staff. She went on to work for an IT consulting company, updating scheduling systems in hospitals throughout the country, then returned to New Rochelle. Lanser earned an MBA with honors in marketing and international business at Iona College, where she was selected as a commencement speaker for her class. At Iona, she held positions at Executive Health Exams International, founded the MBA Alumni Committee and was elected to serve on the Alumni Board of Directors.

While at home raising her children, she volunteered at area nonprofit organizations and was an assistant at the New Rochelle Chamber of Commerce.  In 2013, she took on the role of director of marketing and communications for five years. She was names as executive director in 2017. Lanser also helps many youth of the community via the Chamber’s internship programs. In 2016, she was selected by the New Rochelle Chapter of the Salvation Army to receive the Distinguished Community Service award for her work helping during their Christmas campaigns. Lanser also serves as host of “The Chamber Show” on WVOX.

Jackie Saril and Lauren Pekats are co-presidents of Temple Israel’s Sisterhood, which “brings together all generations of women to serve our congregation.” The Sisterhood sponsors a variety of social, religious, and community activities throughout the year. Programs serving the community at large include movie screenings, political lectures, health & fitness classes and our annual Comedy Night fundraiser featuring temple members. To serve the congregation as a whole, Sisterhood sponsors a congregational Shabbat dinner twice a year and assists with the New Membership Barbecue and other activities. Sisterhood supports the Temple youth with subsidies for youth group events, donations to Israeli charities in the names of B’nei Mitzvah celebrants, Chanukah gifts, and scholarships for confirmands. Many of Sisterhood’s efforts are geared toward fundraising as a means of contributing to the general well-being of the synagogue.  Past projects include lobby refurbishing, sanctuary lectern and Torah repair.

PrevPreviousStudy: Older Americans Are Sitting Way Too Much, and Computers Are to Blame
NextEleven Couples Renew Wedding Vows at ‘I Do, Take Two!’ CeremonyNext